It turns out, the Jira issue tracking system, which we make heavy use of here at Apache, uses Lucene under the hood for searching and browsing issues. This is wonderful since it means Lucene developers are eating their own dog food whenever they use Jira.

Atlassian has opened up some doozy bugs over time, including one of the earliest bug numbers I've ever worked on, LUCENE-140. They sent me a t-shirt for fixing that one (thank you!).

Now, imagine this: what if there were a sneaky bug in Lucene, say a certain text fragment that causes an exception during indexing. A user opens an issue to report this, including the problematic text fragment, yet, because Jira uses Lucene, it hits an exception while indexing that fragment and causes this one bug to be un-searchable and un-viewable when browsing! An invisible bug fixed point.

It's somewhat mind bending to think about, Lucene recursing on itself through Jira, yet it's theoretically possible! Maybe we have a few of invisible bug fixed points lurking already and nobody knows...
Posted by Michael McCandless on 5/21/2011 3 comments: 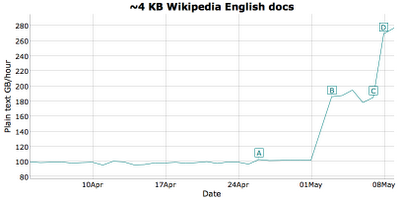 Remember this change only helps you if you have concurrent hardware, you use enough threads for indexing and there's no other bottleneck (for example, in the content source that provides the documents). Also, if your IO system can't keep up then it will bottleneck your CPU concurrency. The nightly benchmark runs on a computer with 12 real (24 with hyperthreading) cores and a fast (OCZ Vertex 3) solid-state disk. Finally, this feature is not yet released: it was committed to Lucene's trunk, which will eventually be released as 4.0.
Posted by Michael McCandless on 5/07/2011 13 comments: