Finding the lead in your house

It's known that exposure to lead, even in tiny amounts, causes loss of intelligence and other nasty problems in children.

We have now phased out lead paint, leaded gasoline, and lead (and other dangerous elements) in electronics. But, surprisingly, it was only relatively recently (2008) with the passage of Consumer Product Safety Improvement Act that we finally set limits on the amount of lead in consumer items, particularly kids toys. As of June 2010, the legal limit for lead in kid's toys is 300 ppm (parts per million) and will drop to 100 ppm by August 2011. The legal limit for cadmium in paint on kid's toys is 75 ppm.

Our house is filled with all sorts of toys, many of which we've picked up as hand-me-downs from various sources. I've long wondered whether these toys have lead, cadmium, etc...

So, I decided to test them myself, using an XRF analyzer. This amazing handheld device emits a small directed xray beam out the front, causing elements to fluoresce with specific spectral signatures. The device detects the strength of these signatures and reports back to you the breakdown of elements in the sample, either in parts per million (ppm) or in percentage (1% = 10,000 ppm!).

In addition to lead, the device reliably detects other elements like cadmium, bromine (used in brominated flame retardants), chlorine, arsenic, mercury, tin, antimony, chromium, and many others!

There are some limitations. For example, all of the door knobs in my house tested high (1-2%) for lead, however, it turns out they are nickel plated but the XRF analyzer was seeing through this layer to the lead beneath. Likely this lead would never transfer to our hands, unless the nickel wears through.

Another limitation is that the device detects elements, not their molecular form. For example, certain forms of chromium, like hexavalent chromium, are toxic, while other forms, like trivalent chromium, is useful and necessary in the human body.

Finally, just because a material contains a given element doesn't mean that element would ever find its way into a child's body. For example, lead bound in plastic is likely difficult to dislodge.

For all these reasons, just because the analyzer detects certain elements in a given item, does not mean the item could cause harm. Think of the analyzer as a simple fact-finder: it reports the raw elements it sees. What action you then choose to take is your decision. However, the precautionary principle applies here: if an item does have measurable amounts of lead or cadmium, why risk exposing your family to it?

While the devices are still insanely expensive, they have come down in price enough to make rental just barely within reach for the end consumer. I rented mine (a Niton XL3T) for a few hundred dollars a day from from Ashtead Technology, and split the cost with a neighbor (she tested by night and I tested by day!).

So I walked around my house, testing everything, and the results were a real eye-opener! A number of ordinary looking things had lead, sometimes at levels far higher than the 300 ppm legal limit, plus other possibly harmful elements: 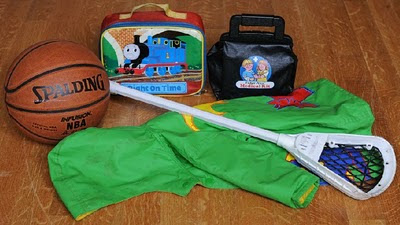 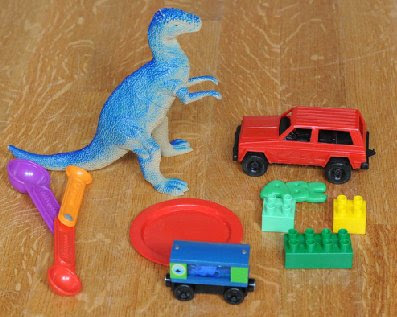 Other toys have high cadmium: 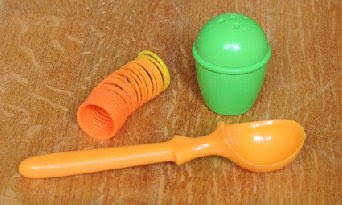 The little slinky has 527 ppm cadmium and 1,365 ppm lead; the salt shaker has 22,634 ppm cadmium; the ice cream scoop has 1,188 ppm cadmium. Here were a bunch of other small toys that had varying amounts of lead:

Small toys are especially spooky since babies are more likely to put them in their mouth. These pictures show only about 1/3rd of the things I found with lead! Here are some other surprising discoveries:

Here are some "rough" patterns:

I'm not the only consumer playing with XRf analyzers: a recent recall of 12M Shrek glasses by McDonald's was initiated by at least two people who discovered high levels of cadmium in the paint on the glass using XRF analyzers.
Posted by Michael McCandless on 6/06/2010